skip to main | skip to sidebar

It's been about a month since the long-awaited remake of the classic playstation game, Final Fantasy VII was announced, so I thought I jot down some notes

Firstly - IT IS MIDGAR

I cannot stress this enough, there seems to be widespread confusion that because it looks very different and a train station was called 'South Edge' it's the future city of Edge (which is a settlement on the edge of the ruins in the game's film sequel)

The first scene shows a bird and sky, which seems anathema to Midgar - but it also shows a crane - which is very similar to our unfinished road at the edge of the city - also one solitary bird? Maybe that's a juxtaposition to the many birds that return at the end

It's a city of glass and steel, yes, and shown in clear daylight, while the old Midgar was always shown in darkness and had a fairly limited central tower section which was essentially Shinra HQ, this was really just a limitation of the 90s technology - Midgar was supposed to be on the scale of Tokyo.

If you actually look at the original game (OG) you only ever see a few screens on the plate, and a handful of people - bear in mind this was the first representation of a city in the FF series, and about as good as it got back then - if you are going to remake this game, then absolutely this needs to be a real city, with skyscrapers and businesses outside one company (although all must be beholden to Shinra of course)

Midgar looks clean, again, on the plate it actually was pretty clean - just dark, again,if you look at the game, the people on the plate are supposedly living in luxury off the cheap and abundant lifeforce of the planet, it's decadent, the land around might be withering, but life on the plate should be desirable and modern, and was pretty good according to Barrett (and the Mako pipes are a dead giveaway) 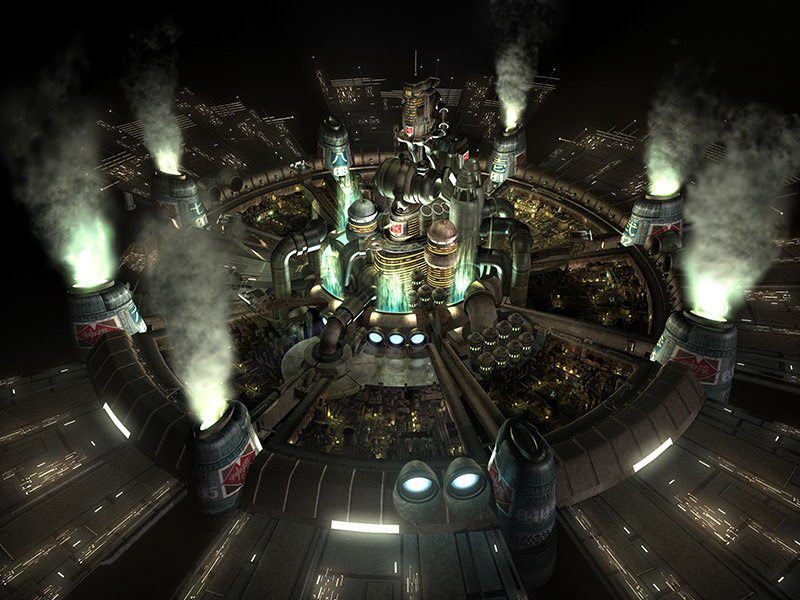 If you think about the OG - 8 massive reactors? For one tower and 8 fairly low rise suburbs? Nah, Midgar was always supposed to be massive and imposing

The roads, pipes and the iconic vehicles all indicate this is Midgar in daylight - if you look closely, you can see the Valentina Easter Egg poster (which is akin to a billboard in the original) and the flashing of neon lights under the highways, indicating a bit more grit and underbelly on the ground (well, plate)


Onto 'Edge' - firstly, the iconic opening scene was always at 'North Edge' station (makes sense considering that opening sequence), should be a dead giveaway, it just means the edge of the plate. Second, I can't believe Edge could ever get that big - sure it could be gone by the epilogue scene, but no way is it turning into a new Midgar and disappearing completely between then and now (while leaving the original ruins!) As far as I'm aware, (in this slightly retconned image from the sequel) future Edge is towards the top right of the vista - you just couldn't make it out in the game...either way it's pretty small

Midgar is clearly never redeveloped, as per the original game, so there's no way a 'clean' Midgar is going to appear with defunct mako pipes around - it's Midgar, guys, as it should be.

Now with that out of the way, after a brief fade to black, we are clearly in Midgar - it's red, and polluted! and there's a freight train!

Briefly to continue my theme from before - there are clearly those skyscrapers in the background, this is the same Midgar but at the plate level

While this is an obvious nod to the original green park, it's also clearly on the plate, I have another theory about this...

The brief blackout indicates a break, now I don't believe this has anything to do with a time jump, (anymore than the short in-game period) but represents Meteor hanging in the sky - why else would it be red?? This the only possible reference to Meteor, which is kind of a big deal, so I'm sticking with that

Now, what exactly those kids are looking at - I subscribe to two theories, it's either the reactors firing up together to fire the Sister Ray (which would be pretty cool) or it's the lifestream in the finale

The latter I feel is unlikely, as by this point Meteor would be destroying them, but if you remember the finale, it's all about the kids watching from Kalm

I'll tie my colours to the mast and say it's the former, and I expect a lot of imagery of children in this remake

The next scenes are obviously Midgar, a reactor and presumably AVALANCHE (whether Biggs and Jessie, or they've been expanded, not sure)

I think we can all agree this bad boy is Midgar!

I've always wondered who the hell lives next to those lights? Not such a great @%$#^$ pizza to live on in my view

Come and defeat the not-so-mighty Mark Lawrensen, you know you want to!

How I waste my time

My Political Views
I am a centrist social libertarian
Left: 0.42, Libertarian: 6.55

Tarquin is a lazy, good-for-nothing, would-be historian who gets easily distracted by idiocy, hypocrisy (particularly of politicians) and football.
The name Tarquin comes from a couple of late Roman kings, and also from a Monty Python sketch, and possibly from some hippies I annoyed several years ago. Peter Hitchens has a problem with my name for some reason, the only reasoning for this seems to be that he thinks it's not a real name...which I'm pretty sure it is, although I'm open to being proven wrong.
Favourite hobbies include: eating, reading, shouting at the TV, watching football and pontificating.